As keyboardist in The Alloy Orchestra:

Alloy premiers our new score to SON OF THE SHEIK in San Francisco on Sept.20, then we are off to the mid-west for 2+ weeks.   Later in October and in November the group plays NY State, Pittsburgh, N.H., and more.  Alloy Orchestra Tour Schedule Here.

Last fall the group was recorded live in performance in Nashville for THIRD MAN RECORDS (Frank Black’s label).  The film was MAN WITH THE MOVIE CAMERA, one of the Alloy’s most rambunctious.  This has now been pressed as a double LP, vinyl.  For sale on tour and soon on the web site store! 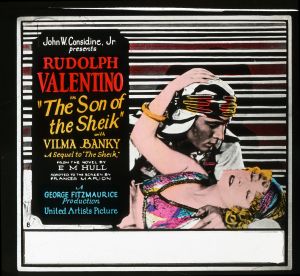 Original Poster for Son of the Sheik.

As a Frottage Artist:

Miller’s Frottage Art will be in two shows this fall:

A Solo show at Geno’s Gallery in  Portland, ME, with the Trinary System performing opening night, Oct.25.

As guitarist/vocalist/ in The Trinary System:

On Oct.25, the band will play at Geno’s in Portland Maine in support of Miller’s art show there, then record a 3-song demo in November.  The two shows they played in May proved they were no longer a Miller side-project, but a real band.

Live video from Geno’s Maine: “I Lead a Modular Life” on Oct.25.

As Guitarist/Vocalist (+cornetist?) in Mission of Burma:

The late August W. Coast jaunt went surprisingly well.  At the Roxy in LA the Volcano Suns re-formed for one song during the encore slot, and Miller added his dulcet cornet tones to Good Not Great to finish things off.
In San Francisco, Steve McKay, tenor sax-player on the Stooges’ FUN HOUSE album, was in the band before us.  So we had him join us and we did a completely feral version of 1970 for our last encore.
In Portland, Chris Brokaw joined us for the Consonant song Buckets of Flowers, and stayed on-stage for a spot-on Down on the Street (FUN HOUSE again!).  These featured Conley on rhythm guitar and Miller on bass.  The 4-piece finished off with Good Not Great again w/Miller on cornet.
In Seattle we merely played a very solid set out-doors at The Bumbershoot Festival.  Dave Minehan (Neighborhoods, who was playing in the Replacements), Steve Stain (early-80’s Thayer Street days) and Chris Porter (Booking agent in Boston’s punk past) all checked in so it was family night.  And we think we saw Xanna Don’t in the audience as well!  On top of that, we saw part of Bootsy Collins set – we got the funk.
All in all, quite a blast.

Mission of Burma performing BREAK ON THROUGH (Doors) at The Space in Boston in 1979.

Musician/composer/soundtracker/conceptual artist. Relentlessly Active. END_OF_DOCUMENT_TOKEN_TO_BE_REPLACED
This entry was posted on Tuesday, September 16th, 2014 at 9:03 am and tagged with Alloy Orchestra and posted in Uncategorized. You can follow any responses to this entry through the RSS 2.0 feed.
« Summer 2014
Winter 2015 »