Roger Clark Miller studied composition at Thomas Jefferson College in Michigan and at California Institute of the Arts, but opted out in favor of rock music: in 1979 he co-formed Mission of Burma which began his musical career.  He found himself returning to music composition in 2008.  He is a roving member of the Callithumpian Consort, and has performed Stockhausen, Christian Wolff, and his composition “Scream, Gilgamesh, Scream” with that ensemble.

Scores are available upon request: booking@rogerclarkmiller.com.

Miller’s chamber music concert at Tufts University on Sept.27, 2018, was performed by the Ludovico Ensemble. There were three premiers: “Rocks Music” (for Solo Cello), “The Solar System Sonata” (for piano and string quartet), and “Three Skies” (for viola and piano). All three of these compositions are structured primarily by natural phenomena. Miller also was a guest lecturer for the “Music, Technology and Culture Seminar” and the “Composition Seminar”.

The title refers both to the forms of rocks used to structure the composition and also to deliberately referencing rock music. It was written for cellist Benjamin Schwartz, who is a fan of both Iannis Xenakis and Mission of Burma (he performed on Mission of Burma’s “The Obliterati” LP).
The opening section, incorporating paper intertwined in the strings, is based on a recording of small rocks being thrown against the garage wall in Miller’s Somerville back yard. He blew up the image of the audio in a computer program and used it for the structure of this section.
The following three sections are structured via a photograph (see above image) of a rock ledge in his Vermont back yard. The veins and cracks and color variations in the rocks guided the density, volume, and range of musical events. The vocals are a nod to Ben Schwartz’s enthusiasm for post-punk rock music.

“The Solar System Sonata” continues my interest in using natural phenomena to structure music, this time not from this planet. For Mars, the rocks formed by water in the very distant past provide the form for the entire movement. For Europa, the frozen ocean on its surface results in a more direct influence: the long glissandi in the strings follow cracks in the ice, and the piano’s continuous sustain pedal creates an audio history similar to how the ice shows frozen time. For Earth, where there is definitely (?) life, I composed entirely in a human/intuitional manner, utilizing a quasi-funky ostinato to anchor the music to more human concerns.

VINES FOR MUSIC (2012), for three pianists at one prepared piano, 2 cellos, 1 viola, and 2 violins.  It premiered at the New England Conservatory’s SICPP (Summer Institute for Contemporary Performance Practice) in June 2012.

NewMusicBox Review (July 2012):
Roger Clark Miller’s Vines for Music was an immediate stylistic contrast, and the musicians proved themselves totally ready for this pared down aesthetic. While Miller nods to Cage in the program notes because of the use of prepared piano, there is a more implicit resonance with Lucier and a piece like Still Lives in the use of shapes found around the house (in Miller’s case, vines attached to the garage door) as pitch contour. The transparent quality of the slow string glissandi and careful inside-the-piano work demanded a special kind of concentration from the players, which was beautifully met. 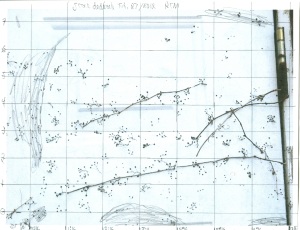 Score Map for VINES FOR MUSIC.

From the N.E.C. Program Notes:
“Vines for Music” comes from my interest in organic functions as organizing principles for music/sound. The score is based on a photograph of old vine residuals on my garage door. The photograph was gridded off into 7 segments, each equaling one minute. The vines themselves were translated into gradual glissandi in the strings, and the suction-marks where the vines attached to the garage door were translated into individual notes for the prepared piano.  While I must (happily) tip my hat to John Cage, this is not aleatoric music – the specific process of living things steers this music.

VINES FOR MUSIC:  Last half of composition.

This is a setting of the Babylonian “Epic of Gilgamesh”.  Many different versions were read by the composer, and the libretto he created was a synthesis of these.  Miller’s take on the story is more about what happened to Enkidu, rather than Gilgamesh.  The music is quite barbaric (given that the Epic was composed 2,500-3,000 years B.C., and that “punk rock” is a subtitle, this may not be surprising).  Scream, Gilgamesh, Scream is approximately 20 minutes in duration.  It was commissioned by the Callithumpian Consort.  Nina Guo, Soprano.  Brian Chase, Baritone.

IN NATURA (2011),  for soprano clarinet, E flat sopranino clarinet (or viola/violin), prepared piano and pre-recorded sounds.  It premiered on March 31, 2011, at the “Outside the Box” festival at Southern Illinois University.

In Natura continues Miller’s interest in concrete sounds, this time entirely from nature: wind, water, insects, storms. The 9’30” collage of natural ambiences is in 3 continuous movements and directs the entire composition. The two clarinet parts (the E flat clarinet part has also been arranged for viola) are based on Miller’s bird-whistling improvisations, incorporating numerous extended techniques, and the sound of very slowed down crickets. The prepared piano serves as commentary.  As in Vines for Music, Miller has eliminated “concert pitch”, creating a score which mimics nature’s tuning: sounds co-mingled but do not form “chords” or have an over-arching tonal center.

Shaking hands with violist Kayleigh Miller at the New England Conservatory in Nov., 2010

Tromso Hillside Rocks (for solo electric guitar, 2014).
Performed by the composer.
The composition is structured by rocks on  a hillside outside of Tromso Norway.

24:24 was composed while Miller was studying composition at CalArts.  It premiered at CALARTS  Yokoncerts in April 1976 with the composer at the piano.