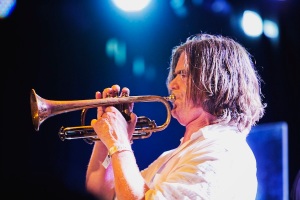 On Cornet at the Roxy in LA, Aug.2014. Photo Michelle Shiers.

Dec. 2017:  The Mission of Burma documentary “Not a Photograph” was included in the Huffington Post’s 18 Documentaries you need to watch on Hulu Right Now.   We’re in there with the Stones “Gimme Shelter”, Bob Dylan’s “Don’t Look Back”, and “The Blues Accordin’ to Lightnin’ Hopkins”.  Pretty amazing – comparatively, we are almost nobody.

July 2015:  Interview with Miller in the UK mag: DROWNED IN SOUND.

Dec. 2012:  A very thorough interview with Miller, covering lots of territory and Mission of Burma is here in The Quietus.

“It’s not for everyone but I’m really not concerned.
Should it bother me?
When it’s really been beyond what anyone could have expected.”
(ADD in Unison)

Mission of Burma formed in 1979 out of the ashes of the Moving Parts.  Using Roger’s Moving Parts songs as a starting point, Clint Conley quickly wrote Peking Spring.  Peter Prescott’s first “real” composition was Learn How, which appeared on the only album they released during their first phase, Vs.  Lots of “press cred”, not much “popular support.”  Playing to baffled audiences was par for the course.  The band folded in 1983 due to Miller’s worsening tinnitus (ringing in the ears, damage from loud volume).

Oddly enough, they reformed in 2002, and have released 4 albums since, performing to much larger audiences than they did “back in the day”.   I guess they are “one of those bands.”

Mission of Burma’s fourth Reformation album, UNSOUND, is now out on FIRE RECORDS.

When Miller first heard the rough mixes for UNSOUND, he thought it sounded “like the Yardbirds squeezed through Wire.”
“UNSOUND is the only Burma album we’ve made since Vs. that I can listen to start to finish, never lose interest, and come out grinning when it’s over.” RCM.

8 responses to “Mission of Burma”