A new Soundtrack Web-site will be up and running mid-spring 2020.

The delay is due to intense work on my art installation, “Transmuting the Prosaic”, for Spring 2020 at the Brattleboro Art Museum, and the associated concerts during that time period (ICA Boston, MassMoCA, Warhol Museum, others).

Please bear with me!
Thanks!

Roger Clark Miller has been creating soundtrack scores for animation, documentary, and commercials since 1992.  He has scored many films that premiered at Sundance.

Miller finished the music to the film “500 Years” in 2016.  It premiered at Sundance on January 24, 2017.  It is the 4th film Miller has scored for Skylight Pictures (two of the other films also premiered at Sundance).  The film is now available on Amazon Prime and, along with “Granito, How to Nail a Dictator” (Skylight Pictures with Miller composing), is streaming on POV in early 2018.

500 Years chronicles the indictment of Rios Montt, the general in charge of the 1982 genocide in Guatemala, and on to the removal of a corrupt president.  500 years ago the Spaniards arrived, and this is the first time justice has been served.  Hence, the jubilation in the Demonstration. 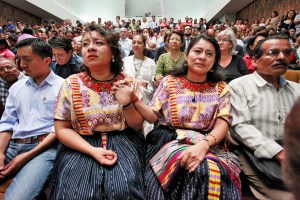 During the genocide trial of Rios Montt.

500 Years: Open.  Opening Sequence of the film: memory-based until it comes into focus.

500 Years: Matilde 2.  Theme for Matilde, one of the protagonists.

500 Years: Demonstration.  Massive amounts of people come together in joyful protest to take down the corrupt government.

500 Years: Final Music.  Things have shifted in a very positive way, but change must be very carefully implemented to avoid falling into the same traps as before.

The  documentary Miller scored in 2011, “GRANITO: How to Nail a Dictator”, recently achieved one of the greatest goals a documentary can achieve. It’s purpose was to expose the horrendous regime that inflicted genocide on the Mayan people of Guatemala in the middle 1980’s, and footage from the film is helping indict the general/dictator on charges of crimes against humanity. Rios Montt will most likely spend the rest of his life behind bars. Amazingly, the film was shown (Feb., 2012) at the National Theater in Guatemala City to a sold-out crowd and standing ovation. Even 5 months earlier, this was unthinkable.

GRANITO was nominated for the Emmy Award Outstanding Investigative Journalism—Long-Form in July, 2013.